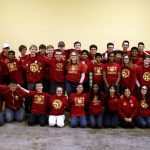 The Crimson Robotics team (below left) competed in Duluth this past weekend at the FIRST Regional Tournament. Team 2526 earned the prestigious Spirit Award which celebrates extraordinary enthusiasm and spirit through exceptional partnership and teamwork furthering the objectives of FIRST.   Also, congrats to senior Sahana Vandayar (above right) who was one of two competitors to be named as 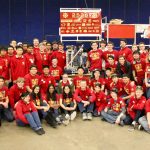 Over the weekend, Crimson Robotics competed in the Lake Superior Regional tournament, as one of 63 teams from Minnesota, Wisconsin, and North Dakota. Our team made it almost all the way, ultimately being eliminated in the semi-finals. In addition to performing well, the team won the Entrepreneurship Award which recognizes the team that has best developed 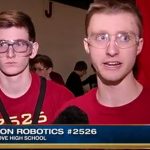 Senior 2526 team member Alex Haidle (right) discusses his experience this weekend. Click here for video from Dan Romano and WDIO News The Duluth Entertainment and Convention Center is bustling this weekend. Starting Friday and going through Saturday, more than 120 high school robotics teams from across the country are gearing up, computing, and battling 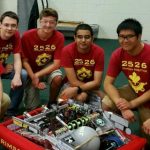 Crimson Robotics on display at the 2016 Minnesota State Fair (Courtesy of @279sup) Crimson Robotics is looking for new team members! Mechanical, electrical or design engineering skills? Know Java or want to learn how to code? Business, marketing or finance interest? Are you a creative photographer, graphic designer, or videographer? All of these skills and interests